I generally try not to fry foods, but there are certain foods that I want Amelia to eat and it requires a little coaxing. Potatoes are one of them. The only way I can get her to eat them is by gently frying them. So, I use a little oil and a little salt and she gobbles down an entire potato herself.

To me, it’s a small price to pay to get her to eat the potato. I will eventually turn to baking or air frying them, but for now, this is the only way she’ll eat them. And, I prefer to make them at home since it’s not deep fried in a fryer at a restaurant with tons of salt. Besides, it’s a once in a while treat that she loves to eat with Chicken Burger and, well, I might want them too. 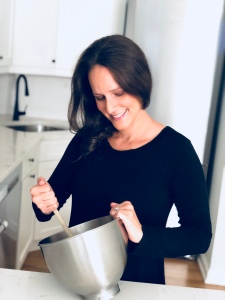 I have an amazing husband and two precious girls (2 and 4 years old). All the recipes you’ll find here are what we eat together daily. I plan our meals around our busy lives with easy, quick and tasty dishes.

I hope my recipes here help excite you to cook for your loved ones and inspire you to even try some new foods.

What should I cook tonight?